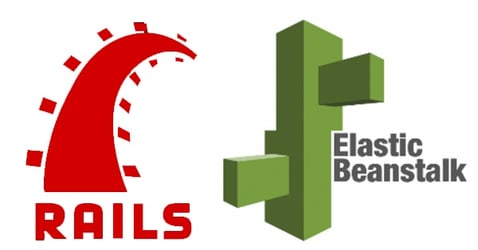 This tutorial shows you how to deploy a Rails app on AWS Elastic Beanstalk. This is part of a series on Running Rails in AWS.

If you're not using HomeBrew or if you're on Linux, you can install it using pip.

We'll use Git to clone the sample app from Engine Yard. If you want to use your own Rails application, the EB CLI requires that you put the app in a Git repository.

So while we are using the EB CLI to create the application and environment, we'll click Create New Application on the Elastic Beanstalk console for the sole purpose of creating these IAM roles. You only need to do this once.

You need an AWS Access Key and an AWS Secret Access Key. If you don't have these, go to the IAM console to create a user and download the credentials.

You can select the defaults for the region, application to use (Create new Application), and the platform version (Ruby 2.3 Puma).

The Engine Yard todo app already includes puma on the Gemfile. If you're using your own Rails app, make sure you add puma.

Elastic Beanstalk will create a Security Group, ELB, and Auto Scaling group for you. After about 3 minutes, your environment is ready. Check the app with

The Engine Yard todo app has an Environment Info page. Click the link at the top and it will show you something like this 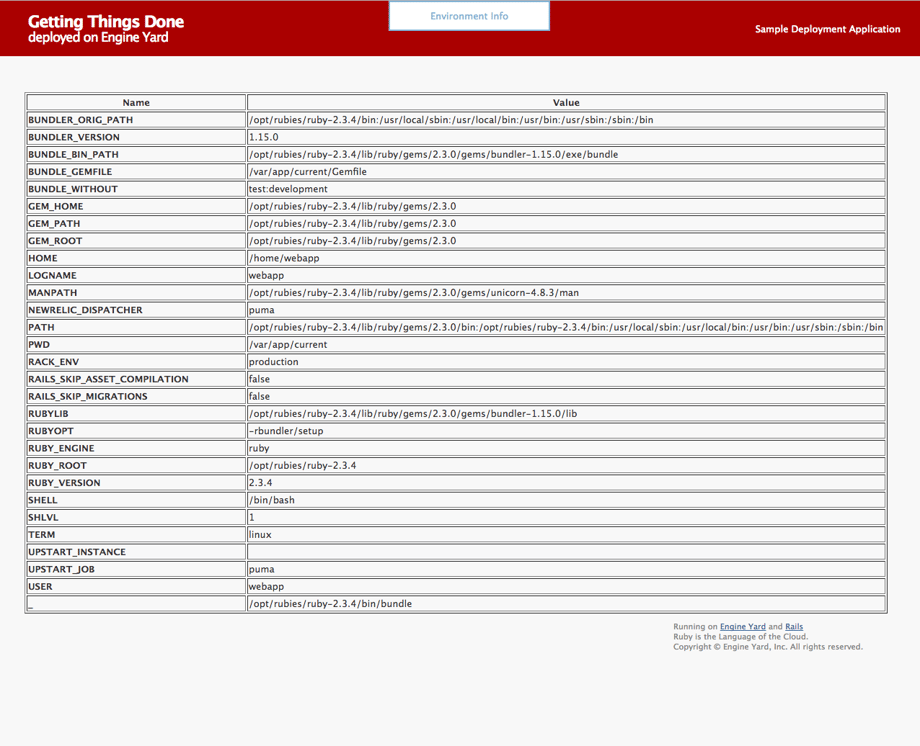 Some interesting things to note are:

You don't need to know any of these as Elastic Beanstalk manages the EC2 instances for you. But you also have SSH access so if you want to look around the EC2 instance, these are some information that can help.

The todo application works even if we didn't set up a database because config/database.yml uses a sqlite3 DB. However, this is the wrong setup for real applications. The todo_production environment only has one EC2 instance so it's fine for now. But if the Auto Scaling group creates a second EC2 instance, this new instance will have its own sqlite3 DB which is not what you want.

To use a central database, delete config/database.yml. We don't need this file as we'll be using DATABASE_URL.

Create an RDS instance using the RDS console. You can use either MySQL or PostgreSQL. Both are supported by the todo application as the mysql2 and pg gems are already part of the Gemfile.

Enter "todo" on the optional field Database name. The logical database will be created after the RDS instance is created.

Set Publicly Accessible to No for security purposes. Once the RDS instance is ready, click the Details icon and click the Security Group. You'll see something like rds-launch-wizard-2 (sg-041b107e).

The EC2 instances created by Elastic Beanstalk should now have access to the RDS instance.

You can also create an RDS instance tied up to the Elastic Beanstalk environment. However, this is not recommended because when you terminate the environment, the RDS instance will be terminated too.

Set the DATABASE_URL environment variable using the RDS credentials. The format is db_type://username:password@hostname:port/db_name.

For example, if we created a PostgreSQL instance, with the following credentials

then we should run

Next, deploy the app without database.yml and open the page.

You now have a Rails app running on Elastic Beanstalk that uses a standalone RDS instance.

Run eb ssh to connect to an EC2 instance in your environment.

Elastic Beanstalk provides an easy way to deploy Rails applications on AWS. You give up some control as the supported Ruby versions and App servers are limited.

Support for background workers like Sidekiq needs improvement. Currently, you have to create a file on .ebextensions and the Sidekiq workers run on the same instance as the Rails application. On a medium-sized application, you should have a dedicated instance for Sidekiq.

This blog post is part of a series. Other options for running Rails in AWS is by using EC2, ELB, and RDS directly, EC2 Container Service, and Engine Yard. Check out the overview here.