Ruby Summer of Code is Here!

In past summers, student interns working on Ruby and Rails projects have made significant contributions to the core code of today’s ecosystem. Just last summer, summer intern projects, under the Google Summer of Code umbrella, funded merging ActiveRelation into ActiveRecord, a rewrite of the the Rails generators to allow for support for RSpec, Haml and DataMapper in the default generators, and the creation of ActiveModel. 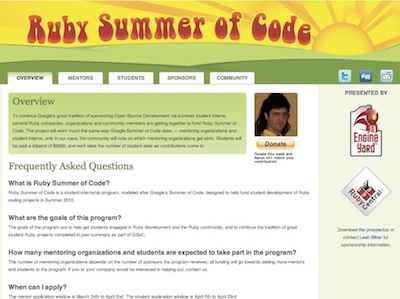 The projects were all HUGE milestones and technical upgrades that have dramatically changed the landscape in Rails. As such, we are, together with Ruby Central and members of the Ruby on Rails core team, pleased to announce the first Ruby Summer of Code!

The project is accepting donations and sponsorships starting right now, and the more money we raise, the more intern stipends we can afford. This is a great opportunity for individual contributors and companies alike to give back to the Ruby and Rails communities. The mentor application window is also open, and student applications will be accepted starting April 5th.

Congratulations to everyone who worked to launch Ruby Summer of Code; we’re looking forward to seeing the results!