Containerisation in the enterprise - Engine Yard: Container fun with Bob and Alice 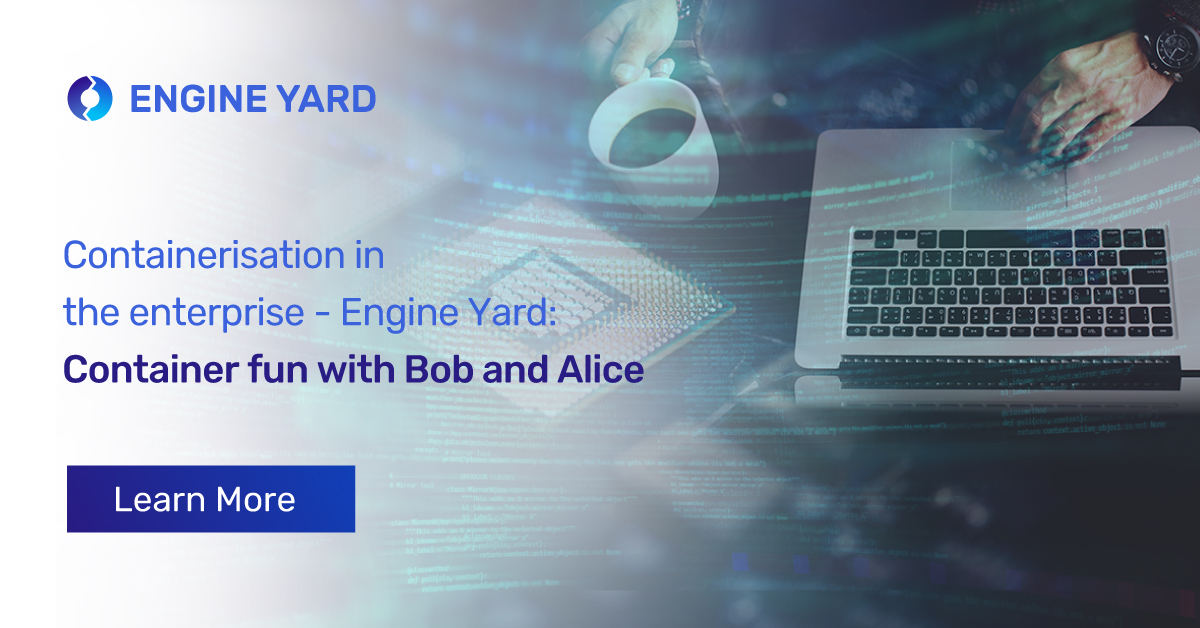 The power of containers is often described with words like portability, scalability and resource utilization. All these terms certainly apply, but I believe a simple story best illustrates how containers make life easier for DevOps practitioners.

Let’s consider Alice and Bob who both work on a team where they are building a Ruby-on-Rails application fronted by an Nginx web server.

Alice, like everyone on the team, needs to run the Nginx web server while developing. Her development workstation is her preferred environment… and it’s Windows 10.

However, the target deployment platform for the application is Ubuntu Linux.

Rather than patch together an environment, she runs a single Docker command to start a local Nginx container. This container maps the content folder to the corresponding project directory. She now has a web server up and running in a few minutes that matches production.

Bob is a Mac fanboy

He, however, decides to set up Nginx natively on his host machine. While performing the installation, he runs into some dependency conflicts based on libraries needed for software from his last project. He spends a number of hours resolving the conflicts and eventually gets his development environment setup. If there is an issue, he won’t know if it’s his environment or a true issue, but that is a problem for another day.

What does happen though is his team upgrades to the latest version of Nginx. Now, the problem repeats itself.

Even worse, a bug is reported on a production environment that hasn’t been updated yet. Now Bob has to figure out how to revert to the old version to replicate the issue.

Well, it works on my machine

There are a number of other slight variations to this story, but they all end in basically the same manner. Alice will spend less time on average worrying about infrastructure and more time developing application capabilities. She knows that if a capability works on her local containers, there is a good chance it will behave the same way in production. Over the long term, Bob’s experience will be different. It may even result in the dreaded ‘it-works-on-my-machine’ scenario.

It is critical to have reliable deployment mechanisms when development teams own the process. The ability to bundle and preserve all the dependencies and environment characteristics into a single deployment artifact is invaluable. The ability is front and center in a DevOps- oriented paradigm.

As many as 27% of developers say that deploying to production is their biggest cause of delay, according to the GitLab 2019 Global Software Engineering Report. The consistency of container deployments drastically reduces the amount of time and effort spent on this area. DevOps scripts and tooling are no longer something to be feared, they become your friend.

Additionally, containers and orchestration environments typically provide for standardised non-functional requirements such as monitoring and logging. They facilitate the decomposition of monolithic applications into services, each of which runs on its own container. The advantage here is that it becomes much easier to observe the behaviour, both good and bad, of that service in isolation. When application services are combined on an instance with a half dozen other components, it becomes more difficult to diagnose problems. Observability is a tremendous benefit of containers in terms of DevOps.

Oh, and did we mention that the deployed application can scale up in milliseconds as compared to seconds or minutes for virtual machines? Now that is something that all the developers can rally around.

With containers, developers get the freedom to focus on the code instead of the deployment, without having to worry about the details… and that, my friends, is power.